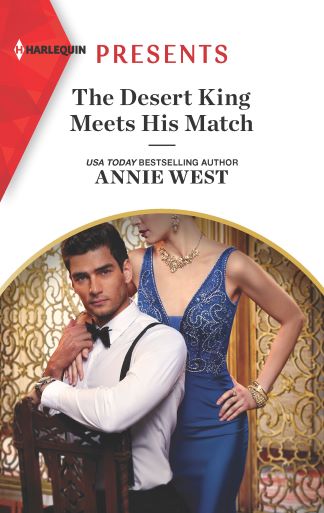 Rosanna has been contracted to find a suitable royal bride for Salim. In this scene they are reviewing the women she has recommended for his consideration but Salim has problems with them all. We join them towards the end of their conversation.

Salim shrugged. ‘She’s beautiful. But not for me.’

For some reason her ice-blonde beauty didn't move him. He’d spent several hours with her and felt not the least stirring of sexual awareness. Whereas, he realised, he just had to be in the same room with Rosanna MacIain for his libido to throb into life. He set his jaw, determined to get this over. ‘Who’s next?’

They dealt with several more on her list. Salim’s answers grew shorter and Rosanna’s mouth tighter as she noted his objections. Everything from shyness to an annoying, high-pitched giggle, to one who’d tried to seduce him at their first meeting and whom he labelled too pushy.

Rosanna drew a slow breath and made yet another note. She looked grimmer than ever.

‘So, you want a woman who’s aristocratic, preferably royal, or used to mixing in such circles. She must be beautiful, but in a way you can’t specifically describe. She has to be confident but not too confident. Able to satisfy you sexually but not be sexually predatory. You’d like a competent, career woman but not so focused she isn’t interested in other things. She needs to be able to talk with anyone, but not presume to put words into their mouth. Someone who’s at home in a formal setting but not just there. She must have a sense of humour and warmth but not an annoying laugh or any sort of verbal tic. Plus she has to like Dhalkur, be an accomplished linguist with not a whiff of scandal about her, and be eager to have children.’

As he watched, Rosanna pinched the bridge of her nose and squeezed her eyes shut. She drew a deep breath then busied herself making another note. But she didn't raise her eyes to his.

‘Right, what about Maryam?’

Salim was already shaking his head. ‘On paper she seems right, but in reality she deferred to me all the time. Even when I asked her a straightforward question she was reluctant to commit herself in case it wasn’t the answer I wanted.’

‘With respect, Your Majesty, that's not surprising.’  He didn't miss the snap in Rosanna's voice, as if she held her temper by a thread. ‘You can be quite daunting.’

‘I told you to dispense with my title in private.’ The way she said it, as if it tasted sour on her tongue, irked him. Or maybe it was the judgemental way her mouth flattened as he gave his completely legitimate reasons for each rejection. ‘As for your with respect, that's what you say when you're feeling not at all respectful.

She met his eyes, her stare fulminating. Yet she retained her composure and said nothing. Salim realised he was trying to crack the barrier she’d erected around herself. She challenged him yet pulled back at the final moment.

That was a good thing. It was safer that way, for both of them. Yet it frustrated him.

He wanted more from her.

‘Are you sure there really is a job?’ She set aside her laptop and stared up at him, her gaze probing.

He frowned. ‘What are you talking about?’

‘Your requirements keep changing and expanding. I bring you one of the world's most beautiful women and you claim you don't find her attractive.’

‘I didn't say that. She is attractive. I just don't want her.’

Because infuriatingly, his body and mind were fixated on Rosanna MacIain. The knowledge made him grit his teeth in annoyance. He was lord of all he surveyed and the one thing he wanted was the one thing he shouldn’t want. Because she was his guest, his employee…

And the source of more frustration than he’d ever felt in his life. When he was with her he didn’t feel like a king or her employer. He felt like a man lost in the desert, thirsting for a single taste of pure, lifegiving water.

‘Are you playing some sort of game?’ Emotion coloured her voice. She sounded fed up. ‘Are you sure a tall, blonde aristocrat will meet your needs—’

‘Why, Ms MacIain? Do you think a medium height brunette from Australia might be a better fit for my needs?’

Her gasp was loud in the thrumming silence. She shot to her feet, eyes flashing pure silver, hands curling into fists beside her. ‘If you're implying—’

‘I'm not implying anything, just pondering.’

And despite his better judgement, enjoying the fact she was no longer treating him like a professional challenge. He much preferred her honest emotions, though he wouldn't accept such insolence from anyone else.

The air sizzled with the energy she radiated. Salim felt it like a shower of sparks peppering his skin. And in the heavy weight settling in his lower body. The strain of clenching muscles.

‘I’d never…’ She shook her head as if words failed her, but not for long. ‘No, you’re the one sabotaging this process. I’m the one trying to keep it on track.’

She dragged in deep breaths, her breasts rising against her blue dress. Valiantly Salim refocused on her face, flushed and vibrant.

‘That’s the problem. This project isn’t on track at all. It’s going off the rails.’

It was his fault for agreeing to have her here. He should have known better that night when she’d stalked into his office as if she owned it, demanding to know what he was doing there. That stirring excitement hadn’t left him since. He’d been on tenterhooks, trying to do the right thing, curbing a reaction to her that was as undeniable as it was inconvenient.

She hiked up her chin, at the same time cocking her hip and planting her hand on it in an attitude of pure, feminine provocation that was impossible to resist.

‘Okay. I’ll bite. Why, in your opinion, is it going off the rails? Tell me straight. Don’t waste any more of my time.’

‘Why? Because of this, of course.’

Salim took a single stride that brought him right up to her. He saw her narrowed eyes widen but not, he saw, in dismay. He slipped one arm around her waist, drawing her against him and cupped the back of her head with his other hand.

For an instant he was lost in the white-hot flare of light in her eyes, then he bent his head and his mouth met hers. 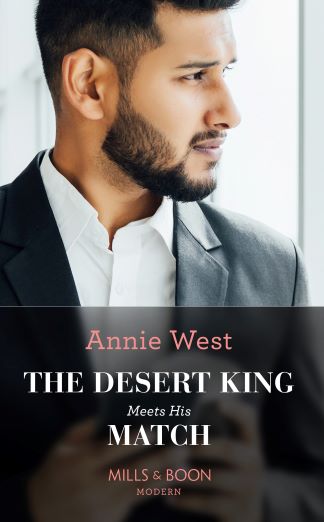