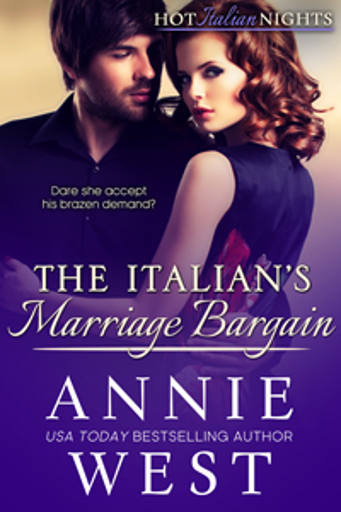 "Are you trying to blackmail me?"

"Blackmail is such an ugly word, don't you think? Persuade is more appropriate."

For their hasty marriage was still a secret. It hadn't originally been meant to stay that way, but when their relationship turned to ashes there'd been no reason to tell the world and every reason to stay quiet.

A zap of electricity fizzed between them, the air charged by heightened emotions. Those dark blue eyes glittered with a lethal fire.

Curiously, Massimo welcomed her hatred. It was better than the cool disregard she'd shown earlier. As if he meant nothing to her anymore. That had ripped open the chasm of loss within him.

He wanted to matter to her.

He'd known, when he came to Venice, that he still needed Gina. His desire for her hadn't died. Nor had the feelings he'd tried to smother with years of work and responsibility.

I've already been there.

Time might have eased the anguish to bearable levels, till recently when he'd been unable to think of anything else but the need to fix this untenable situation. But for the first years after their separation, life had been just that, the suffering of the damned.

"In that case, my dear wife, brace yourself for a flurry of the worst possible publicity." Massimo paused in the act of levering himself from the chair and raised one dark eyebrow. "What will your precious De Laurentis think of that? He's sunk everything he has into this film, and borrowed heavily from investors. If the public takes against the film's stars and refuses to support it..." He let the sentence hang.

"But at least you won't have to give interviews to the press about our secret marriage." He raised one hand as if to forestall any comment. "I'll save you that. I'll speak to them myself. I'm sure I'll be able to provide enough juicy details to satisfy them."

Blank with shock, Gina felt her stomach swoop like a kite caught in a downdraft, about to smash to earth.

"Why are you doing this?" The words, a husk of sound, were out before she realised.

Matteo had washed his hands of her years ago.

Silvery grey-green eyes fixed on her but there was nothing cool about them this time. His stare burned her skin. She felt flames lick her stomach and breasts.

Surely not! He didn't want her like that! Not anymore.

Then his expression altered and she was looking at the urbane businessman, all ease, except for the obstinate thrust of his jaw.

"Let's just say that being together in Milan will be mutually beneficial. You'll be able to put an end to the last rumours of an affair with a married man. I'll get a beautiful hostess whose professional reputation will be a draw for the House of Conti. After it's seen you're with me instead of De Laurentis."